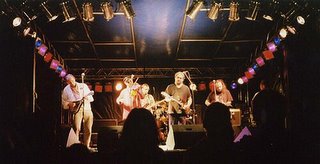 In 1989 the Wedding Present, at the suggestion of original guitar player Peter Solowka, released two Peel Sessions of Ukrainian folk music. They recorded a third one which went unreleased until 2000, when they were all compiled and released as Ukrainian John Peel Sessions. Shortly after, Solowka left and formed the Ukrainians with several of the mucians brought in to play on the Peel Sessions.

The Ukrainians have released several studio and live albums of original and traditional versions of Ukrainian-influenced folk music. They show their English rock influences by covering several popular songs of their own (in their Ukrainian style of course) including songs by the Sex Pistols, the Velvet Undergrouond, Sinead O'Connor, and Prince. However, my favorites remain their versions of several Smiths songs, especially their awesome take on The Queen is Dead - by far the best of the bunch.

From the Psni iz the Smiths e.p. (compiled on the Kultura CD)
Koroleva ne Polerma (The Queen is Dead)
Batyar (Bigmouth Strikes Again)
Spivey Solovey (What Difference Does It Make)
M'yaso-Ubivstvo (Meat is Murder)
Posted by thepsychicpilot at 3/01/2006 10:09:00 PM